“Behind mass immigration, there is terrorism.” -Marine Le Pen

The Rohingya are a minority Muslim ethnic group who have lived for centuries in Myanmar. They have not been recognized as one of the country’s 135 official ethnic groups and have been denied citizenship in Myanmar since 1982, rendering them stateless.

The Arakan Rohingya National Organisation claims that the Rohingya population has been living in Arakan, now known as Rakhine since the 12th century. However, due to lack of basic amenities, services and opportunities, increasing violence and ongoing persecutions, millions of Rohingya people have fled to neighbouring countries either by land or boat.

Over 40,000 of these Rohingyas have entered India illegally, forcing the Ministry of Home Affairs to take this issue up seriously and deal with it in an appropriate manner. 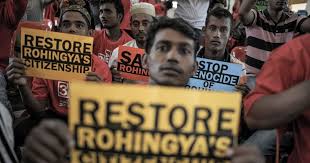 The Minister of State for Home Affairs, Kiren Rijiju has stated that the government has decided to deport them for it is concerned about the suspected infiltration of terror outfits among the Rohingyas.

The UNHCR asked India to reconsider its decision, sympathise with the most persecuted ethnic group in the world and adopt a humanitarian approach in dealing with the issue. However, India has neither been a signatory of the 1951 UN Convention nor the 1967 Protocol, both relating to the status of refugees. Both of these documents are included in the UNHCR statute. Hence, even the UNHCR cannot compel India to offer refuge.

Refusing to budge under international pressure, India made it clear that it would not compromise with its security concerns.

Thus India has been criticised for turning a blind eye towards the ongoing humanitarian crisis in Myanmar for its own selfish – albeit practical – concerns.

However, the impending question that is being scrutinised by multiple stakeholders of the issue remains unanswered:

Is India doing the right thing by deporting over 40,000 Rohingya Muslims on the pretext of national security?

With a growing population of 1.3 billion people, the Government of India is finding it hard to cater to the needs of such a massive population. There is an unimaginable strain on our resources. India has been experiencing acute poverty, water and food shortage and insufficient infrastructure. Adding 40,000 non-citizens to its population with the associated risk of granting terrorists posing as deported Rohingyas a free pass into the country, is a risk that India can’t afford to take.

India has given shelter to Tibetan refugees that followed the Dalai Lama, the Sri Lankan Tamilians during their Civil War and Bangladeshis during their Liberation War.

Other than providing refuge to its neighbouring countries, India has helped them in instances like earthquakes and other natural calamities by stepping forward and aiding the affected areas with money, manpower and resources.

There is a faction of society which believes that India is biased against Muslims and is using that as a motivating factor to not grant Rohingyas citizenship. It’s a baseless allegation as India has shown its religious tolerance and magnanimity on multiple occasions, a prime example being that of India’s assistance to the very same Rohingyas in Bangladesh through Operation Insaniyat in 2017, where India provided them food and medicine.

Intelligence officials have found links between a Rohingya terror group, known as Aqa Mul Mujahideen (AMM), that had earlier bombed the Myanmar borders, and Pakistan based terror outfits like Lashkar-e-Taiba, Jaish-e-Muhammad and Hizbul Mujahideen that are active in Jammu and Kashmir, New Delhi, Hyderabad and Mewat. A militant group called Harakah al-Yakin, better known as the Faith Movement is said to be working in coordination with AMM. They are known to have caused conflicts between Rohingyas and Buddhists in Rakhine province in the past.

A nation’s security is of paramount importance to the government and they cannot risk the infiltration of terrorist organisations into India. If the Rohingya are not deported, the possible presence of non-state actors in this ethnic group who wish to cause unrest and incite violence in India could prove to be fatal for a country where more than 8000 people have died in the past 18 years due to terrorism.

India offering refuge to Rohingyas will also mean confrontation with a strategically important neighbouring country, Myanmar as their Chancellor Aung San Suu Kyi has stuck to her strong stance on the issue and has refused to discuss the plight of these people despite international pressure. This breach of trust on India’s part can prove to be detrimental for future diplomatic relations between the two countries.

However, India’s double standards on deportation of immigrants is noteworthy. There have been multiple occasions where India has shown leniency towards some groups for the immigration process. Currently, over 0.2 million registered refugees from over 28 countries seek refuge in India while 20 million reside illegally. Every country that wishes to protect its sovereignty will deport its illegal immigrants irrespective of the religion they practice. While a bold stance on keeping the Rohingyas out can be appreciated from the security point of view, the day is awaited when India would extend the same stringency of rules and regulations towards all other immigrant group residing illegally within the country.